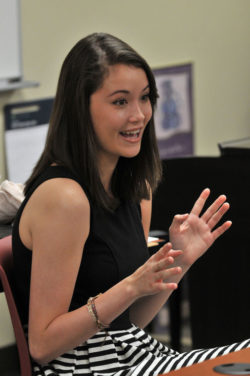 By Jonathan Turner
DAVENPORT — Katie Chang is not only a beautiful young actress with Rock Island roots who has worked with some of the biggest names in Hollywood.

The 20-year-old — granddaughter of Rock Island’s John Scally and daughter of an Alleman High alum — is also remarkably free of ego, wise beyond her years, incredibly level-headed, professional, down-to-earth, friendly and generous with her time. With four films already under her belt, Ms. Chang visited the Creative Arts Academy of the Quad Cities last Friday, to offer students a peek behind the cutthroat show-business curtain and encouragement to pursue their artistic dreams.

“This is a business of rejection,” she said matter-of-factly. “You can do 50 auditions before you get one callback. That’s definitely been a huge thing I’ve had to learn. I’m not good at it. I’m just angry.

“In reality, the failure is not learning from the experience — staying down when you’ve been knocked down,” Ms. Chang said. “You need to keep persevering, keep having a positive attitude. The industry will definitely hand you your butt if you let it. It’s been a struggle.”

A graduate of New Trier High School in Winnetka, Ill., Ms. Chang started doing community theater when she was about 7, and at 13 she started studying at the Actors Training Center at the Wilmette Theatre in suburban Chicago.

She won a part in her first film, Sofia Coppola’s 2013 “The Bling Ring” at 17, after Ms. Chang responded to a casting notice for a 17-year-old Korean-American girl. Last week, she said it was a bit easier to snag that role in the ensemble picture, since it was such a specific part she fit.

The movie filmed in spring 2012 around Los Angeles, and her character Rebecca is the ringleader of the group (which includes Emma Watson of “Harry Potter” fame). Ms. Chang described Rebecca as “kind of manipulative, very commanding, very selfish. It was difficult because it was intimidating, to play such a commanding and intense main character, as well as being in my first film and a Sofia Coppola film.”

In the drama from Tim Blake Nelson, a Columbia University professor of philosophy (Sam Waterston) is mugged on the doorsteps of an apartment building. The film (which co-stars Glenn Close, Kristen Stewart and Corey Stoll) delves into the chain of events that precipitates the attack, and the lives of the characters the incident brings together.

Ms. Chang said it was convenient to be involved in that production, since it was filmed at Columbia, during her freshman year at the Manhattan institution. She told the Q-C students she wanted to pursue higher education instead of directly going into show biz; she is transferring to Northwestern University’s drama program (in Evanston, Ill.) this fall.

“I wanted to have a normal life; I wanted to go to college,” Ms. Chang said. “The film business is not reliable. You could work for three months, and then be off for three years.”

Despite its apparent glamour, “it’s still a job,” she said of filming, noting many crew members work harder than she does. “I’m passionate about it, but I’m always nervous.”

“The first steps you guys have already taken,” Ms. Chang said of training in the arts. “That’s good. If you want to be a professional actor, get some nice head shots done. Get involved in short films, shooting in non-union acting, theater. Build up your resume, to show the work you’ve done.”

“Never stop training, never stop taking classes,” she advised. Acting is like being an athlete, Ms. Chang said, noting you don’t just show up to play a game. “Acting is a muscle — you need to exercise it.”

Ms. Chang’s newest project, “The Outskirts,” is another ensemble film, due to be released Nov. 6. After falling victim to a humiliating prank by the high school “Queen Bee,” best friends and world-class geeks, Mindy (Eden Sher) and Jodi (Victoria Justice), decide to get revenge by uniting outcasts of the school against her and her circle of friends. Ms. Chang is featured in the comedy film’s poster of the group.

She told the CAA students she wished she had this kind of arts program (which integrates music, theater, dance, art, photography and other arts into the regular curriculum) when she was younger.

“Not everybody in the state and country has access to that, and that’s a shame,” she said. “We could be losing out on the next great X, Y or Z, and they might be amazing. I see how lucky you guys are, and how jealous I am.”

Doing theater and film is what excites Ms. Chang, and the CAA students also get to do something they love, she said. “That’s how I feel about my life. If I didn’t have that, I wouldn’t be who I am.”