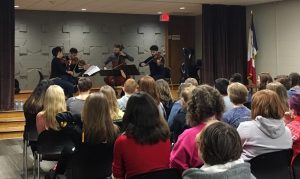 On Monday, March 5, The Tesla Quartet treated CAA 8th graders to a performance at the Creative Arts Academy. The quartet performed a 15-minute piece by Hungarian modernist composer Bela Bartok. Members of the quartet spoke with students about Bartok’s unique style, the importance of non-verbal communication as a member of a team or group and the lifestyle of a working artist. The Tesla Quartet features Ross Snyder (violin), Michelle Lie (violin), Edwin Kaplan (viola), and Serafim Smigelskiy (cello).

BIOGRAPHY
Praised for their “superb capacity to find the inner heart of everything they play, regardless of era, style or technical demand” (The International Review of Music), the Tesla Quartet brings refinement and prowess to both new and established repertoire. Dubbed “technically superb” by The Strad, the Tesla Quartet recently took Second Prize as well as the Haydn Prize and Canadian Commission Prize at the 12th Banff International String Quartet Competition. The quartet has also garnered top prizes at numerous other international competitions, including the Gold Medal at the 2012 Fischoff National Chamber Music Competition, Third Prize and the Best Interpretation of the Commissioned Work at the 6th International Joseph Haydn Chamber Music Competition in Vienna, and Third Prize at the 2012 London International String Quartet Competition. The London Evening Standard called their rendition of the Debussy Quartet “a subtly coloured performance that balanced confidently between intimacy and extraversion.”
“Though free to think and act, we are held together, like the stars in the firmament, with ties inseparable. These ties cannot be seen, but we can feel them.”
— Nikola Tesla
Having recently completed their tenure as the Marjorie Young Bell String Quartet-in-Residence at Mount Allison University in New Brunswick, Canada, the Tesla Quartet also holds a community residency in Hickory, North Carolina that includes performances and workshops at local colleges, universities, and in the public school system, as well as a dedicated chamber music series. The quartet performs regularly across North America, with recent international appearances in London, Vienna, Beijing, Shanghai, and Seoul. The 2017-18 season includes debut performances in Germany and Hungary, concerts across America, and a residency with the Quad City Visiting Artist Series.